Serbian businessman and fugitive Zoran Ćopić sat in a coffee shop in the Bosnian town of Banja Luka last week and told reporters for the Organized Crime and Corruption Reporting Project (OCCRP) that he fled his adopted homeland of Serbia because he was falsely accused and didn’t want to rot in prison.

It appears he should have run a little further.

Republika Srpska police arrested Ćopić this week and seized his Bosnian businesses, money and an airplane, alleging he used a Bijeljina sugar factory he bought through privatization to launder €7 million for fugitive drug kingpin Darko Šarić. He already faces money laundering charges in Belgrade related to Šarić and took off to avoid prosecution.

Exactly one week earlier, Ćopić gave a lengthy, exclusive interview with OCCRP reporters. He said he was an honest businessman, even as he admitted to tricking banks into loans for phony companies; taking a cash payment from Šarić; and setting up a complicated set of transactions so he could sell the company Mitrosrem to Šarić for €27 million, he said.

Mitrosrem, is at the heart of his Serbian legal problems. It is one of Serbia’s largest agricultural companies with more than 86 million square meters of land and 500 employees.

Ćopić never received all of the money from Šarić and Mitrosrem was seized last year by Serbian authorities in an indictment that netted Šarić, Ćopić and others. Ćopić contacted an OCCRP reporter last month to complain about its journalists’ ongoing investigation of his companies, including several bought through privatization. During an interview at the coffee shop of the Palas Hotel in Banja Luka, Ćopić portrayed himself as the victim of zealous prosecutors and powerful business enemies. But he would not provide details, and at times described actions that appeared to implicate him in other crimes.

For example, when confronted with documents showing he owned an offshore company involved in money laundering, he interrupted and said the offshore company was set up just to get a loan for an existing company.

“I wanted to separate them because of the banks, so they wouldn’t be connected companies. You can’t take a loan from the same bank if you already have one,” he said in the taped interview.

Ćopić said he has been pressured by police and prosecutors to cooperate with them as a witness against other unnamed people, but rebuffed the advances. They even offered to put him in a witness protection program, but he again refused to talk, he said.

“I have three children. I don’t want to put my children as hostages, screw that.”

Ćopić arrived dressed in a leather jacket and jeans, unshaven, looking tired. He smoked a pack of cigarettes during the interview, and said he was very hurt by what happened in Serbia, especially financially. Throughout he complained of his health and financial problems. 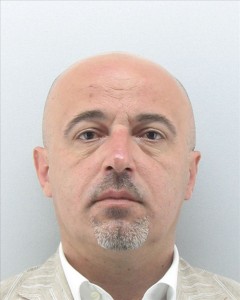 Ćopić also claimed his friends have abandoned him, and he can’t get money, he said. “Who can help me with five charges? Who dares to and who will?”

He was accompanied to the interview by Miograd Dobrić, executive director of Pink TV in BiH. Dobrić said the two had been friends for more than 26 years. Dobrić is also a partner in Avio Rent with Ćopić, which was seized this week. Dobrić was not arrested, although Avio Rent’s director was.

During the talk, Dobrić often interrupted and defended his friend.

That situation is now much more complicated.

This week’s actions included the Bijeljina Sugar Factory, which Ćopić owns through his Banja Luka based Agrocoop Export-Import. The RS Special Prosecutor’s office said that he laundered €7 million from Šarić. Prosecutors and police in the RS said Ćopić has a hand in about 150 companies. OCCRP found a direct link to more than 50 companies, including agricultural firms, and a tobacco distribution firm in Nis.

RS police also arrested Drago Nižol, director of Ćopić’s company Avio Rent and Ljubo Mrđen, director of Agrocoop. The companies were raided and their accounts blocked, and the Commission for Securities has been instructed to stop the subscription of shares of the sugar factory by Agrocoop.

The value of blocked assets is estimated at €10 million. Among the seized assets are Cessna aircraft worth €200,000 owned by Avio Rent and Ćopić’s Audi 8, estimated at about €45,000.

Investigators in the RS have been working closely with investigators in Serbia and have made many visits to Belgrade in recent weeks, according to several sources involved in the investigations of both Ćopić and Šarić.

In the taped interview, Ćopić denied having a friendship with Šarić, saying they met in 2008. But he did say that six times he had visited Šarić’s home in Montenegro, where Interpol and international investigators say he is now hiding out. The visits were to retrieve money he was owed, he said.

Šarić, a Montenegrin businessman who is on the run after being indicted for drug trafficking, money laundering and other criminal offenses, tried to legalize his dirty money through the privatization of businesses in Serbia and Bosnia and Herzegovina, according to investigators and a Serbian indictment. That indictment said that Ćopić participated in the laundering of money acquired through the sale of cocaine.

In mid-2008, Ćopić founded the private company Avio Rent together with Dobrić.

In the interview, both claimed Avio Rent was actually a bad investment.

“There are no clients for that in BiH. After we purchased the plane and registered it in BiH, the first flight was on Dec. 28, 2008 and then the (financial) crisis took place and that was it,” said Dobrić.

Records from the Banja Luka Airport show that the company has registered only 32 flights since that first flight.

The Privatization of the Sugar Factory in Bijeljina

However, Ćopić’s biggest business in BiH was the privatization of the Bijeljina Sugar Factory. He told OCCRP he invested about €4.5 million in the company.

At the time of Ćopić’s involvement, the company was bankrupt and not operating. Ćopić said he wanted to buy the company for its power plant that uses coal to produce steam. With increased prices of fuel oil and gas, coal has become three times more profitable, he said.

Through his company Agrocoop he offered to buy the factory from the state. Although his name is not mentioned in the court records, Ćopić confirmed he personally participated in the privatization process.

Around the first transfer, Agrocoop filed a letter of intent expressing an interest to purchase the state capital in the factory in late 2008. In Jan of 2009, Agrocoop said in a letter it wanted to complete the purchase of the factory and had paid off the sugar factory’s debt to Pavlović International Bank in the amount of €1.5million. Included in that sum, Agrocoop also agreed to pay one-quarter of the debt to the factory workers of about €84,000.

Ćopić now says the money was actually from Šarić to pay for Mitrosrem. Ćopić said the transfers were not related to the privatizations but police raided Pavlović bank and the Sugar Factory looking for documents.

He said that despite the coincidental timing of the transactions, he did not use Šarić’s money for the privatization of the Sugar Factory which was funded from his Serbian companies.

According to data obtained from Košutić, the factory’s liquidation manager, Agrocoop Banja Luka has invested nearly €6.4 million in the company. During the interview, Ćopić constantly repeated that he has fulfilled all obligations toward the Sugar Factory, but that the Securities Commission has failed to register Agrocoops shares for four months. He said he was angry and that he was being persecuted by authorities. That the money originated from an accused drug kingpin is of no concern to Ćopić, he said, since at the time Šarić was not yet in trouble with the authorities.

In the interview, Ćopić told OCCRP that, although Serbian police said they were searching for him, he was not hiding in Banja Luka and he was reachable. He was even visited once by Serbian prosecutors to give a statement about one of the cases against him and once by two high level police officers he met at the Bijeljina police station for seven and half hours.

Ćopić said he was most adversely affected when the Serbian officials seized his company Mitrosrem which he bought in 2005 for €15 million and in which he said he invested most of his money. In 2008 he made an agreement with Šarić to sell him this company for €27 million but this purchase was never completed because Šarić was indicted for drug trafficking. According to data from the Serbian indictment and other documents obtained by OCCRP, Šarić paid Ćopić directly or indirectly €16.5 million of the €27 million he says he was owed for the company.

One of the payments was in cash. Ćopić said he received €50,000 from Šarić but said “what I got in cash is insignificant … It’s nothing. I needed if for the attorney.”

Ćopić didn’t confirm how much money overall Šarić paid him.

According to prosecutors in Serbia, shares were seized because, ”there is a real danger that Darko Šarić, as the majority capital of this company … could take the property … and thus impede or preclude its seizure,” they wrote in a request for seizure approved by the court in July 2010.

”They took my company from [Darko Šarić], not from me but from him. Because of that, they kept me from completing the investment. From one side, the [Privatization] agency broke the contract and on the other side the [court] seized it under pressure, probably, by some high level agreement, prosecution or ministry.”

Business documents show that Ćopić bought Mitrosrem in privatization in December 2006 through a consortium led by Ćopić’s company DSD tobacco. He paid €15 million and promised to invest €10 million more in the company, according to contract Ćopić signed with the Privatization Agency.

When he was asked by OCCRP where he got more than €15 million for Mitrosrem, Ćopić answered he took credit from banks. Once he established his first company, the rest was easy, he said.

“You go, borrow the money, and buy one company … That firm you bought has some property.. And then you go buy second, third and sixth, got it?” said Ćopić.

In July 2009, DTM Relation, owned by Nikola Dimitrijević, signed a contract with Privatization Agency and Ćopić to gain control of Mitrosrem, and in August 2009 Ćopić gave a presidents seat on the board of directors to Šarić’s lawyer Andrija Krlović. Krlović is also under indictment with Šarić.

Then five months later, Ćopić used Avio Rent in Banja Luka to buy DTM relations. That again gave him control of Mitrosrem and paved the way for the company to be sold to Šarić, he said.

Ćopić explained why the sales were handled in this way.

“The essence is this – Darko Šarić did not own a company that could buy Mitrosrem even though he had money,” Ćopić said referring to the conditions of privatization that would govern the sale. “[Šarić] didn’t have a company that had an income of €30 million. His lawyers and I agreed that I should a company that meets the conditions and I would transfer Mitrosrem to that company and then when the agency approved it all, he would take shares in the company and in that way he would get ownership.”

The special prosecutor’s office of the RS requested that Ćopić be detained further while the two other arrested directors would be released pending the investigation.